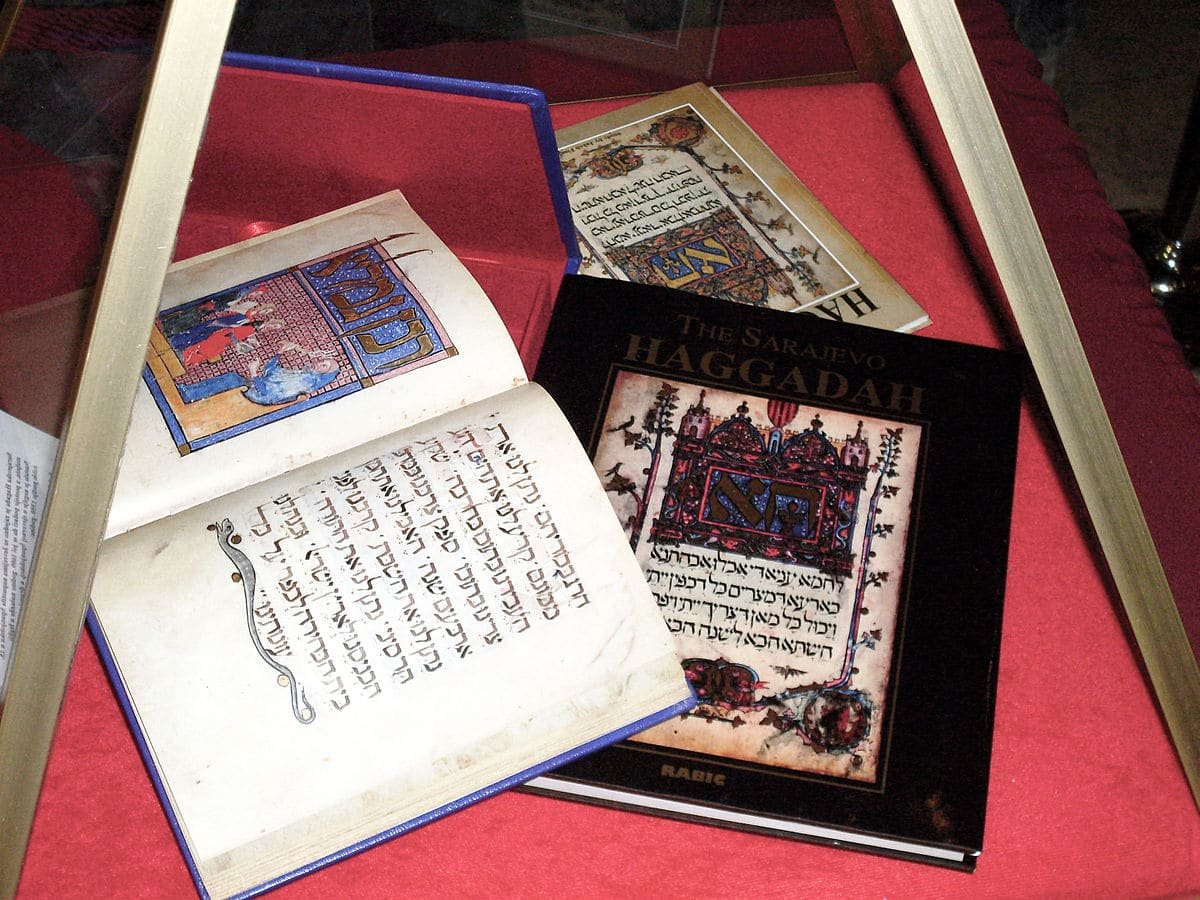 Jewish heritage is an integral part of Bosnian heritage as there is an indelible connection between the two. There are numerous examples that tell the story of this liason. The most famous one is probably that of Sarajevo Haggadah. The Jews all over the world are cherishing the tradition of retelling the story of their exile from Egypt. During the holiday of Passover, they read this story from a book known as Haggadah (heb. the telling). Various Haggadot exist all over the world and one of them came to be known as the Sarajevo Haggadah. Strangely enough, the book is not even made in Sarajevo but on numerous occasions. The inhabitants of the city have risked their lives to save the book. They accepted it as their own thus it became part of Sarajevo heritage.

The origin of the book is probably 13th or 14th century Spain. A culturally rich and religiously diverse place and different cultures all left their mark on this unique manuscript. One of many tenets of Judaism is not to make images or idols. Because of the presence of catholic kingdoms in northern Spain, the Christian medieval art found its way into this Jewish book. The illustrations of Moses and other prophets and people from the bible can be seen on the pages of this Haggadah. A Jewish man has most probably written the text and by some accounts, a Muslim compiled it all together. All of this tells us that even the compiling of this unique work was a multi-religious venture. So it is very fitting that the book found its refuge in Sarajevo. A city known as small Jerusalem or as the Sephardim would say “Saray el chico Yerusalai”.

In the late 15th century, the Jews of Spain were expelled by the queen Isabelle and the original Haggadah was carried along. The exact whereabouts of the book in the later years is not known. But it is confirmed that for a certain time it was in Italy. Where it received the stamp of approval by the Inquisition, meaning that it wasn’t damaging to the catholic faith. Some years later when the Sephardi Jews reached Sarajevo the book came along with them. In the 19th century, the Kohen family sold the book to the Bosnian National Museum.

Fast forward to the second world war and Sarajevo is occupied by the fascistic forces and Nazi officers. They are coming to the Museum to take this valuable Jewish manuscript.  What the custodian of the museum, Derviš Korkut, did next was nothing short of extraordinary as he risked his life by lying to the Nazi officers. He told them that the book was already taken by another officer. All the while hiding the book and then taking it out of the museum. There are several theories as to what happened next. The most plausible one is that the book was given to an Imam who was hiding the book in a local mosque. In the nineties, another plight befell the people of Sarajevo when the city was besieged for 44 months. A distinguished Bosnian historian dr. Enver Imamovic was able to take the Haggadah out of the museum and together with other valuables. He kept it in a safe of the Central Bank of Bosnia. So Sarajevo Haggadah was saved by the people of Sarajevo once more.

Meet Bosnia is a travel agency based in Sarajevo and focused on providing tours throughout Bosnia and Herzegovina and the Balkans. Our aim is to introduce the historical and cultural attractions to our guests in greatly organized city tours, Bosnia packages, and Balkan packages. For multiple years, we have been one of the leading incoming travel agencies in Bosnia and Herzegovina thanks to the great organization of our operators, the wide knowledge and enthusiasm of our guides, and the immeasurable wish to make the trips of our guests meaningful and unforgettable.