Sarajevo Olympics was a multi-sport event held in 1984, where Sarajevo was a host city of the Winter Olympic Games. At that time Sarajevo was a part of a former communist country – Yugoslavia.

Welcome to the Olympic city

Sarajevo, the capital of Bosnia and Herzegovina, was a part of the country called Yugoslavia. If you didn’t know before, it was a communist country that consisted of todays: Croatia, Bosnia and Herzegovina, Serbia, Slovenia, Montenegro, and North Macedonia. The Socialist Federative Republic of Yugoslavia was an economical giant and country with developed infrastructure and industry.

What happened to Yugoslavia?

Yugoslavia fell apart as the countries saw their opportunity to become independent. Further events led to the war. War in Bosnia and Herzegovina was from 1992 until 1995.

How did Sarajevo get to be the host of the winter Olympic games?

At the time of making a decision, Sarajevo as a representative for Yugoslavia was voted as the winner along with Gothenburg, Sweden, and Sapporo, Japan. It was voted out because of a study that showed its favorable elements for holding the Olympic games in terms of climate.

After being chosen to be a host city, Sarajevo started to grow in terms of infrastructure and objects. The main events were to be held in the mountains of Bjelašnica, Jahorina, Igman, Trebević, and Vlašić. Mountains and Sarajevo were fulfilled with construction sites for future hotels, roads, airports, and cable cars.

There are nowadays two settlements in Sarajevo that were constructed for the Olympic games in 1984, Mojmilo and Dobrinja. Sarajevo was improved and beautified for future visitors to the ’84 Olympics.

Vučko – the mascot of the Sarajevo Olympic Games

„Vučko“ is a symbol mascot for Sarajevo 1984 Olympics. It is a wolf illustration made by Slovenian designer Jože Trobec. Vučko is nowadays, an important symbol of the city.

What was the difference between Sarajevo Olympics and another winter Olympics?

Sarajevo Olympics managed to gather 12 more countries – participants than every winter Olympics before. Due to the fact that the Sarajevo Winter Olympics were held during the time of the Cold War, it was a fascinating fact that it was not banned by easter on the western block, full of participants both from the USA and the Soviet Union. It was until then, the most successful Winter Olympics with the most attention in media.

Sarajevo was in 1984, the glowing center of the world.

Sarajevo Olympics, as we mentioned before, was the most successful winter Olympic event of that time with:

The city was prepared, ready to host visitors from all around the world and participants eager to win the trophy of ’84 Olympics. Until the first day of the event, NOT ONE snow flake fell! But then, on the night from 7th to 8th of February 1984, just before the opening flame, it started, guess what – snowing!

The opening ceremony of the Sarajevo Olympic Games was held on the Koševo Olympic stadium on 7th of February in 1984. It was built before the story of winter olympics, in 1947. The interesting fact is that it was built voluntarily by local workers. It was renovated just before the olympics. Koševo stadium is located near the core center of Sarajevo. Nowadays, it is a home to the Football club Sarajevo and hosting mainly concentraded around football and athletics. 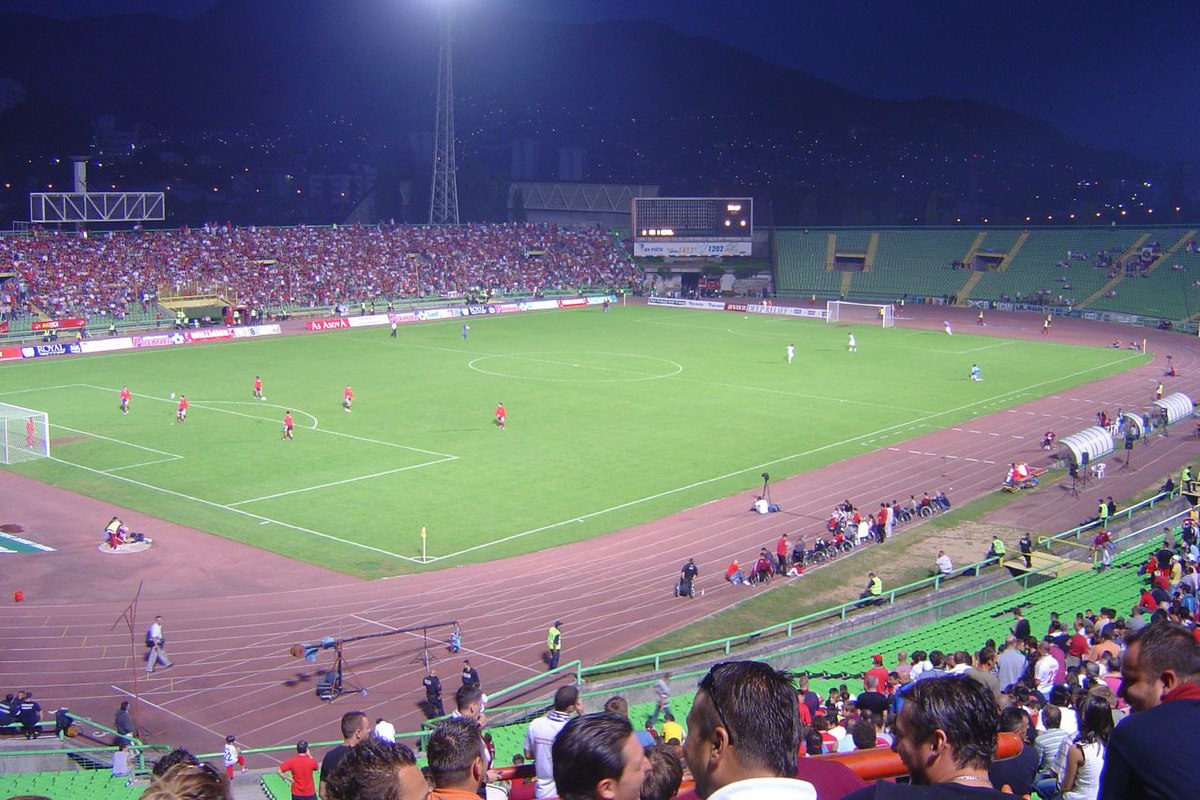 Just after Yugoslavia got the news to host the Olympics, an adjacent part of the Koševo stadium with an indoor ice rink was built in 1978 and it was the most expensive infrastructural project. The reason why this hall has a second name – Juan Antonia Samaranch is written in our What to see in Sarajevo local guide saying:

„Sarajevo Winter Olympics were the first Olympics organized by Juan Antonio Samaranch who will turn out to be the longest-serving president of the Olympic Committee and one of the most influential people in the sport ever. He was blown away by the organization of the Olympics and he continued to have a tight connection with the city he became an Honorary Citizen of Sarajevo, and also Olympic Hall bears his name: Olympic Hall Juan Antonio Samaranch as eternal gratitude to all he has done for the city.“

In recent years, it is a venue for hosting various sports events.

In the city center, near the Miljacka river, there is a Skenderija center. It was built in 1966

Mojmilo, known as the Sarajevo Olympic Village was built in 1982 in order to settle over 2000 athletes during the Olympic games. The building of this complex lasted for only 20 months and its architect was Milan Medić. It was constructed in a form of a square and filled with restaurants, cafes, halls, and other facilities for the Olympics. There is a metal sign in from of the former entrance to the village in the shape of the Olympics. Now, it is a known residential settlement in Sarajevo.

The most memorable sight from the Sarajevo Olympics is for sure a bobsled track built back in 1982. Bob and sled competitions were watched by 20.000 – 30.000 people during the Olympics. It was the most expensive object made for the Olympics. At that time, it was one of the fastest and safest bobsleigh tracks in the world. The biggest attraction to Olympic games visitors is the Vučko boat ride through the bobsleigh. The track was used for the World cup competitions up until the ’91 war.

Trebevic bobsleigh track was used in war, during the Sarajevo siege as a firing position by the army of Republika Srpska. It is damaged nowadays and filled with street art – graffiti.

It is a must-see place in Sarajevo where you can come using a Trebevic cable car. The ambiance of Trebevic is good for relaxing in clean air, recreation, Sarajevo hiking, and sports.

The Olympic Museum was opened on February 8, 1984, the opening day of the Winter Olympic Games in Sarajevo. Its purpose is to permanently preserve the memory of the organization of one of the biggest sports events in the history of Bosnia and Herzegovina. The museum building was designed by the famous Czech architect Karel Pařík in 1903. The Olympic Museum stands to bring the story of the Sarajevo Olympics alive until today.

Sarajevo Olympics - tours by our agency

Our agency offers fully guided tours to the Olympic mountains which will give you insight into events from the 1984 Winter Olympics. You will be able to see the facilities used during the Olympics, firsthand, and learn more about the Olympics from a local point of view. There are a lot of interesting facts about the event only known by locals and it would be quite interesting to learn while visiting Sarajevo.

If you are eager to visit both the mountains and the beautiful green oasis, be free to choose this tour. It guides you through Trebevic and bobsled track, Igman mountain and Ski jumping slopes, Bjelasnica, and Spring of river Bosna nature park.

Sarajevo after the Olympics

Not so long after Sarajevo ’84 Olympics, the political situation in Yugoslavia slowly started to change. As the time from the great leader Josip Broz – Tito’s death went by, countries within Yugoslavia seemed to seek independence since Serbia’s influence was growing.

First to separate from Yugoslavia was Slovenia and in 1991 the official war between Serbia and Croatia started. The war in Bosnia started in 1992 and until now, the longest siege in modern history, the Sarajevo siege, is still remembered.

One of the most interesting facts about the Sarajevo Siege is the story about Sarajevo War Tunnel, a tunnel that was dug by hand, beneath the Sarajevo International Airport and it was the only way to deliver essential groceries to the city.

In case you want to educate yourself and read more interesting stories, we suggest you read more about Sarajevo roses. Even though they are called roses, they represent everything but a rose, check out why.

If you travel to Sarajevo or visiting just now, make sure to book our Fall of Yugoslavia | Sarajevo siege tour and learn what happened in Yugoslavia that left so many traces on Sarajevo and Bosnia today.

Back in 1984, Sarajevo, a representative of former Yugoslavia, held the Winter Olympic Games due to favourable weather conditions and infrastructure. Book our Olympic tour and learn more about Sarajevo Olympics

What are the popular sights to see from Sarajevo 1984 Olympics?

To explore the best sights in Sarajevo in an adequate way, we suggest you look out for our Sarajevo tours The most popular sight is the Sarajevo Bobsled track on Trebevic mountain, and it can be reached by Sarajevo Cable Car from the city centre. Besides that, one can also visit Olympic Museum which is located in Sarajevo centre.

Furthermore, the Olympic mountains Bjelasnica, Igman, and Jahorina are located approximately 30km outside Sarajevo and if you have spare time while you are in Sarajevo, those three Olympic mountains are definitely worth visiting.

So, when you come to Sarajevo, make sure to read our blogs and be free to book our tours guided by amazing and top-voted guides.

If you are a traveler who would like to add something to our list, or you know some amazing facts about this city, make sure you contact us with the message subject “Sarajevo Olympics – Suggestions”. Looking forward to hearing from you!

Manage Cookie Consent
To provide the best experiences, we use technologies like cookies to store and/or access device information. Consenting to these technologies will allow us to process data such as browsing behavior or unique IDs on this site. Not consenting or withdrawing consent, may adversely affect certain features and functions.
Manage options Manage services Manage vendors Read more about these purposes
View preferences
{title} {title} {title}
Book now or ask anything!